Global energy investments: the growing importance of the electricity vector

Global investments in the energy sector exceeded 1800 USD in 2018, staying roughly stable with respect to 2017, according to the «World Energy Investment 2019» IEA report.

The electricity sector was in the first place for amount of investments in 2018 for the third year in a row with about 775 billion $ (43.1% of the total), overcoming the investments on oil & gas supply: this is a clear evidence of the growing importance of the electricity vector, whose demand has increased at a pace nearly twice as fast as the general energy demand rate. A slight decrease of the global investment value was observed (-1%) compared to 2017(even though investments in battery storage soared by 45%), also due to the sharp decrease of investment in coal power (-3%) (mainly in China and India) and hitting the lowest value since 2004.

The investments in renewable energy sources (over 300 billion $) showed a 1% decrease with respect to 2017. However, adjusting the time series to 2018 cost levels, a rising trend over time can be observed, with renewables investment activity up by 55% since 2010, implying that the investments needs for renewables are decreasing over time for the same amount of installed capacity (especially for PV and wind). 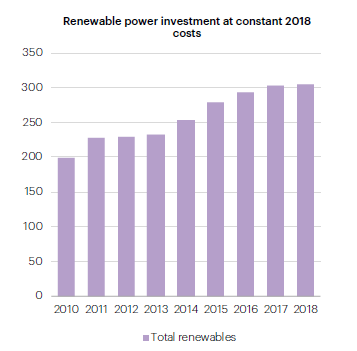 United Kingdom: first coal-free week for more than a century to meet the electri...

Electrical Energy: the Italian and the international landscapes

SolarPower Summit: PV to play a crucial role in the global energy transition